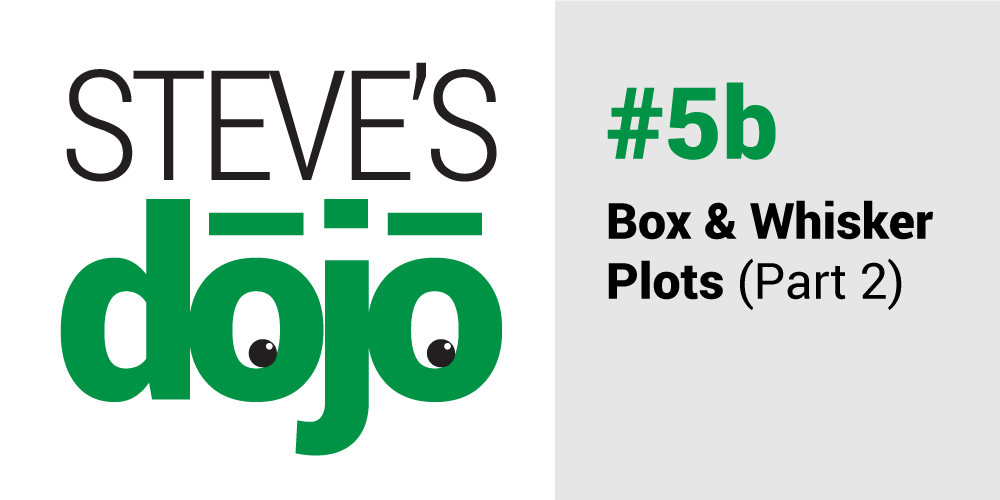 Box and Whisker Plots (Part 2)
Part 1 was on how to build a box and whisker plot. In Part 2 we're defining whisker length and visualizing variation within and between the variable groups. This time we're giving you answers to the questions no one has asked.
Steve Johnson

The last post was about building a box and whisker plot. This post is about defining whisker length and visualizing variation within and between the variable groups.

Remember, a box and whisker plot is a distribution. 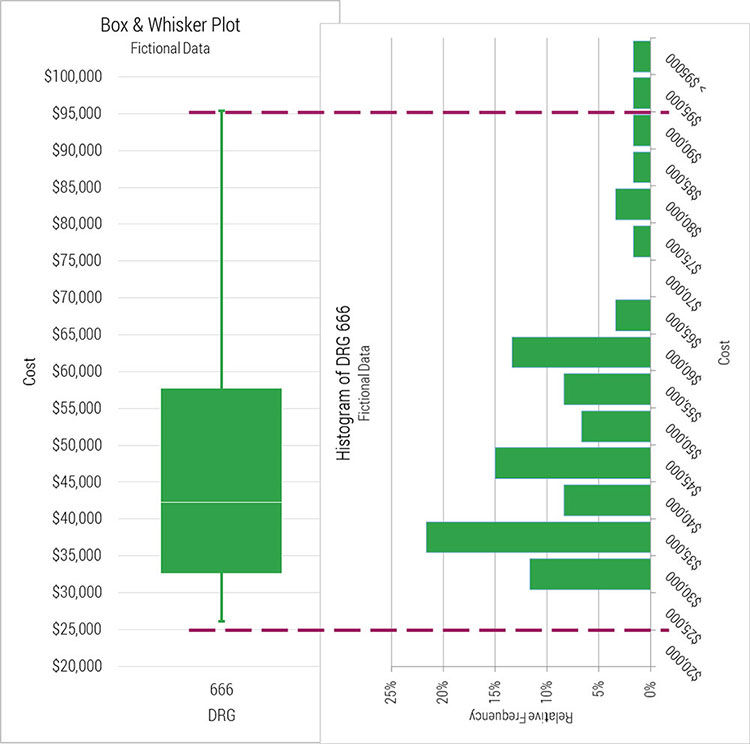 In this example, the upper quartile is much taller than the three lower quartiles in this dataset, suggesting a right skewed distribution. I’ve included the right-skewed histogram of the same dataset to demonstrate the relationship. The red dashed lines are there to demonstrate the same scale. 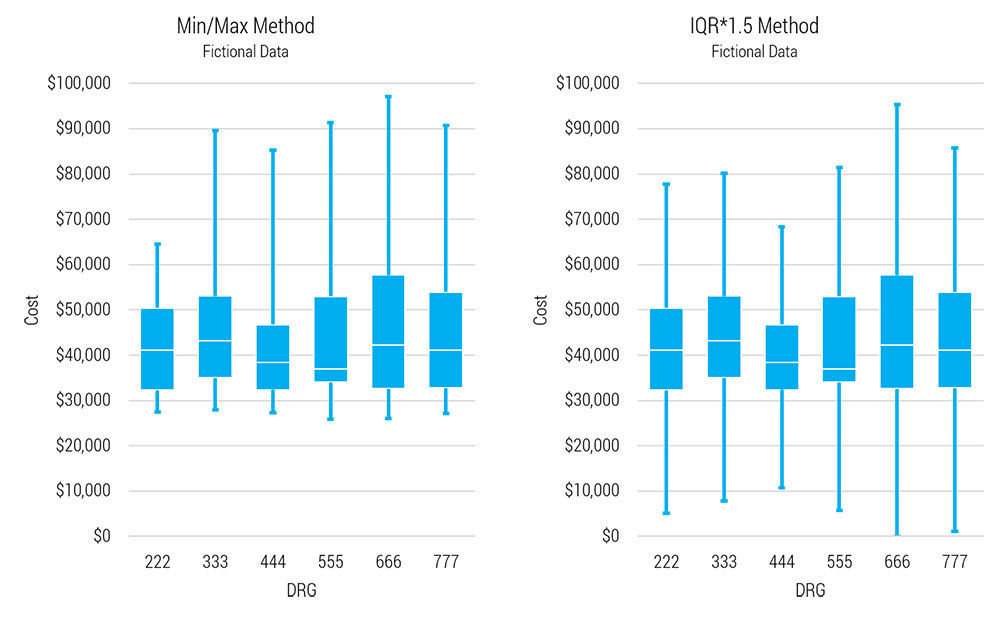 Notice the minimums (left graph) of the separate DRGs are tight ($25,895 - $27,868. Range = $1,972). The IQR*1.5 method (right) is a gross misrepresentation of the lower quartiles, but in the upper quartiles it’s the maximums which are misrepresenting the data; five of six DRGs’ maximums are outliers. That is, in the upper quartile, the IQR*1.5 method is better. Those complex formulas select the best representation in each case. 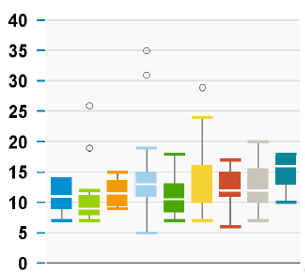 The default method in BOE is even better. It expands on this logic to set the upper whisker at the minimum datum that’s less than (75th %ile + IQR*1.5) and then it shows any higher data as outliers. And it works in reverse in the lower whisker. Here’s an example I pulled from a BOE scorecard. Those little circles are outlier cases. The groups in this case are calendar quarters allowing the reader to look for trends over time, but because they’re box & whisker plots, the reader can also study distributions of any single quarter.

Last week we examined just the DRG group. If you took this analysis one step further you could compare the variation among the six DRGs without depending on point estimates like standard deviation. Box & whisker plots were born for this.

These three plots, side-by-side and set to the same scale, help visualize variation within and between groups. 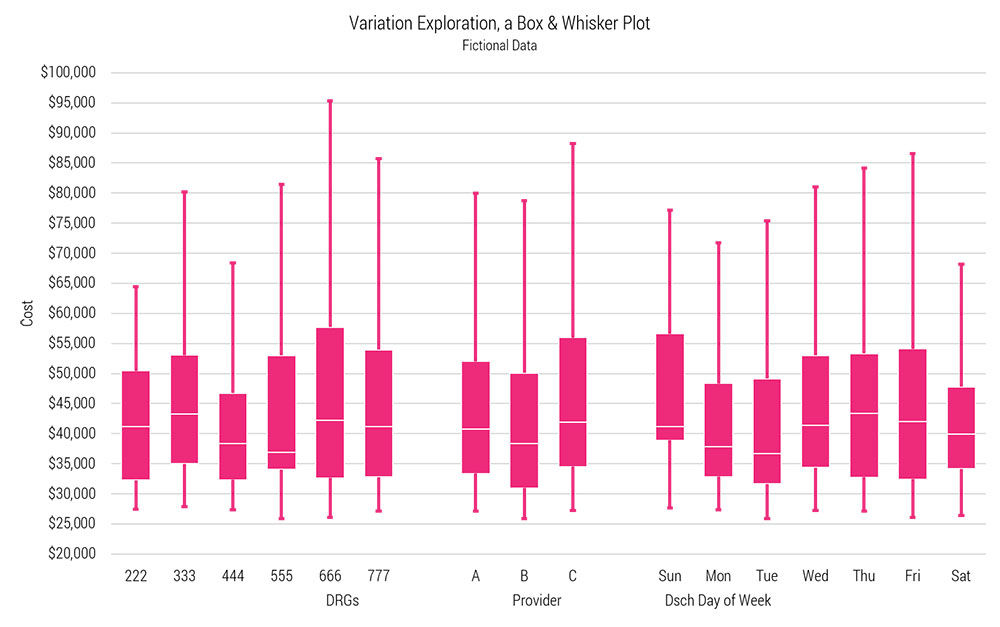 There are many observations to be made about the fictional dataset with this one graph:

If this were real data, our rather simple exploration exercise would certainly influence the direction of a project.

Facilitation is the art of guiding a team through a problem-solving process. It requires a set of skills that can be learned. In this week’s dojo Steve takes on the first of many facilitation topics. This is where we leave the linear process space and enter the equally important but circuitous people space.

Standard work is a visual guide to accomplish a job quickly and accurately. We asked our resident etiquette expert, Patient Advisor Mary Martha Tripeny, to put this Lean tool to the test by creating standard work for thank you notes. The holidays are stressful enough. This year, when nagging your children to write thank you notes, give Mary Martha’s standard work a try.