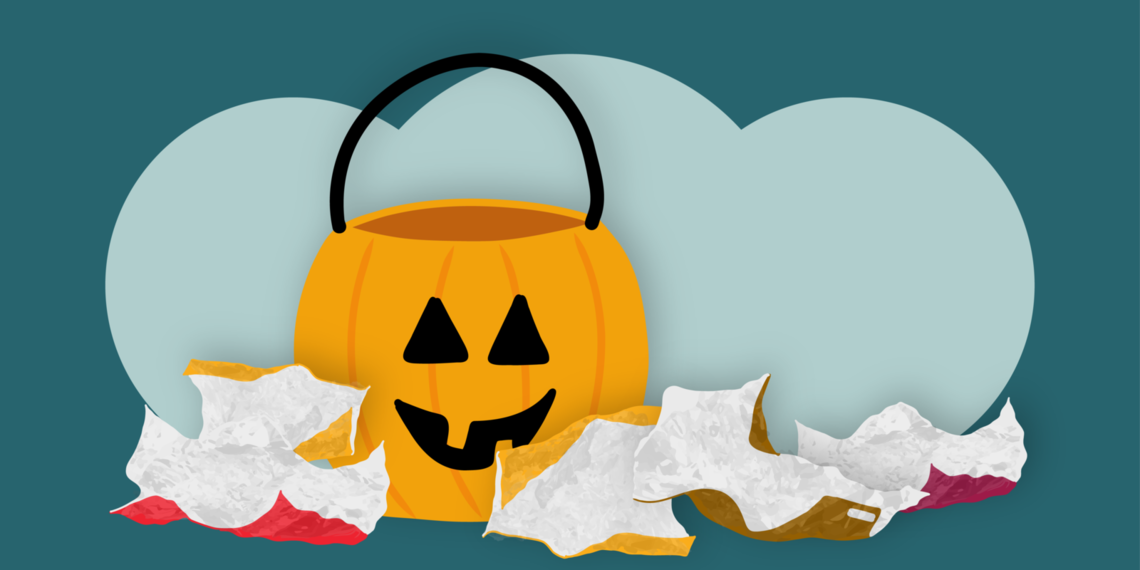 Unwrap Toxic Positivity
For many of us, focusing only on the positive—at the expense of experiencing a negative emotion—has been taught and expected. But why not adapt and learn from something so unique as an authentic human emotion? Sr. Director of Employee Experience Christian Sherwood shares learning from psychologist Susan David.
Christian Sherwood 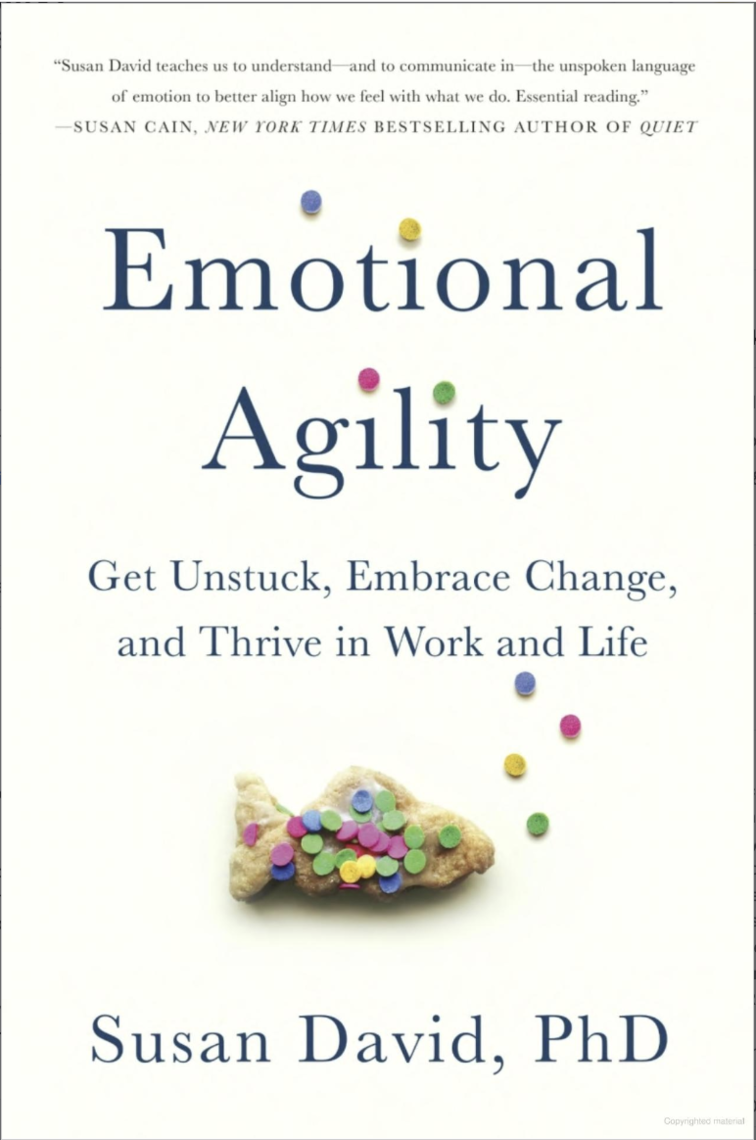 Emotional Agility: Get Unstuck, Embrace Change and Thrive in Work and Life by Susan David, PhD

oxic positivity is the act of repressing a normal response to a difficult emotion and replacing it with a feigned positive response. Adam Grant, organizational psychologist at the Wharton School of Business, explains that toxic positivity pressures people to “look on the bright side” while suppressing anxiety, anger, sadness, and grief.

While there is no shame in acknowledging the positive, there are consequences to intentionally pushing aside the not-so-positive. In her book, Emotional Agility, Harvard Medical School psychologist Susan David further explains when these difficult emotions are put aside, people actually feel more isolated. The act of only finding the silver lining may cause more damage and fragility than if we sit with difficult emotions and learn to work through them in a productive way.

1. Show up for your own emotions

My own career was shaped in the age of the Oprah-endorsed gratitude journal encouraging exclusive focus on the positive. Both at work and personally, the message was to push aside difficult or bad emotions with the intention of staying positive.

“Being positive is a new form of moral correctness,” says David. Yet positivity should not diminish or exclude less-positive feelings. She notes we miss out on normal, human experiences needed to push through and learn from difficult feelings when we don’t acknowledge them.

Our emotions show up as a response to what is important to us. We know there is a vast spectrum of human emotions, and some are more difficult or tougher than others.

When we push “bad” emotions aside, we can’t acknowledge their intrinsic meaning to our personal needs and values.

Our emotions are data points; we don’t have to take action when they show up. When we take the time to lean into them—good or bad—they can be a signpost to help guide future actions that align with our values.

Professionally, if we don’t recognize our own difficult emotions, we may render ourselves incapable of being present and compassionate for our peers and team members when they encounter a difficult experience.

2. “See” the people around you

In her pre-pandemic TED Talk, David talks about seeing people authentically. When we take a rigid stance of only expecting and accepting positive emotions, we diminish the authenticity of those around us. To be clear: this is not intended to encourage crankiness. Rather, the goal is to see emotions as a normal part of being a human and encourage psychologically safe spaces.

This flies in the face of all those cutesy wooden signs and words on t-shirts saying things like “Positive Vibes Only.” When we acknowledge the less-than-positive emotions, it reinforces our acceptance of reality and ultimately allows team members to feel safe sharing the difficulties of their professional lives. This authenticity breathes life into a culture where we can openly admit hardships, concerns, and mistakes, and in turn make adjustments.

Now post-pandemic, and as an organization striving for compassionate care for our patients and their families, creating emotionally safe spaces for our team members is an important consideration for leaders.

3. Resist the urge to act and “fix” difficult emotions

In a leadership role, it would be a scary prospect to add “Purveyor of Feelings and Emotions” to your list of duties. Here’s the good news: that isn’t the goal! The objective is to simply acknowledge tough emotions; no fixing required.

The simple act of allowing difficult emotions to come out—without any solutions offered—is one of the most compassionate and psychologically safe acts you can give. David explains there is power and choice in the space between the stimulus and our response (itself a quote from psychiatrist Viktor Frankl, who wrote about his experiences as a prisoner in concentration camps during World War II in his book Man’s Search for Meaning).

When we slow down and resist the urge to fix the emotional response to a stimulus (e.g., resisting the urge to say any of the following: “don’t cry,” “here’s a cookie,” “I’ll take care of it for you,” etc.), we can offer companionship and empathy while an individual has a chance—however uncomfortable—to contemplate how the situation is a guide for their own values.

In the past year, I learned firsthand about slowing down and resisting the urge of the “quick fix.” Or I should say, I was forced to learn as there was no quick fix in sight.

Last December, due to an external data breach with our timekeeping vendor, we were unable to capture work hours. There were so many aspects to consider, and we had to act quickly. Many teams from across the health system and campus converged to create temporary solutions while we waited for the timekeeping system to come back online.

During those months, I was working closely with a colleague who was, at that point, an acquaintance. I learned so much from her keen ability to pause—even in the face of what felt like impending doom. During more than one intense and difficult discussion (because there were far too many to count), there would be a proposal for an immediate course of action. This colleague would say with calm resolve, “Let me get back to you in a few hours so I can think through all the variabilities,” or “I need to sleep on that; I’ll let you know first thing tomorrow.”

She was acutely aware of the situational urgency, and rather than agreeing to a quick solution influenced by the emotions of the hour, she maturely used her knowledge to consider other angles. She has the professional discipline and composure to pause and ensure that the course of action truly met our business needs. I learned so much by watching her sit with the tough emotions and craft a response, rather than simply reacting in the moment.

Regardless of the origin and magnitude of the difficult emotion, we can pause and use the discomfort to assess our next steps and how they correspond with our personal values.

Emotional agility is necessary; we do it every day whether we know it or not. For example, if we have a rough morning personally, we typically switch gears and (try to) adjust and get on with work. The details and feelings of the rough morning didn’t magically disappear, rather we humans have the ability to allow opposing feelings to sit together in the same emotional space.

This is obviously a simple example; it’s the more difficult situations where we are less inclined to give ourselves permission for contrasting emotions to hold court together. David notes we can be brave and afraid at the same time; we can have both courage and fear.

Letting go of toxic positivity means giving as much permission and mental bandwidth to our difficult emotions—like being afraid and fearful—as we do for the “good” emotions, like being brave and courageous. As leaders, we can give ourselves, our team members, and our peers permission to have opposing emotions while we work. When we acknowledge the complexity of our feelings, we give ourselves, and others, permission to be more authentic.

It takes courage to show up for your own emotions. It takes professional courage to build safe spaces where people can acknowledge their emotions safely and productively. It takes discipline to lean into that emotional space between an event and a response. It takes self-control to allow opposing emotions to sit side by side.

David admitted “discomfort is the price of admission for meaningful work.”

No one likes to be the bearer of bad news—but in health care, it’s part of the job. Fortunately, there’s a simple framework to help us get through it. Hospitalist and UACT co-director Claire Ciarkowski introduces SPIKES: a simple mnemonic for delivering bad news.

Health care is full of high emotion—especially right now. Thankfully, there’s a simple framework we can follow to de-escalate with compassion. Hospitalist and UACT co-director Claire Ciarkowski introduces NURSE: a simple mnemonic for responding with empathy.

When life gets busy, it’s easy to forget what keeps us grounded and therefore more satisfied with life. Sydney Ryan reflects on the importance of making time for yourself and prioritizing what is important for you. She explains simple, deliberate actions that have made a difference in her work and her life.