he first sentence of the Washington Post’s editorial on Friday, April 17 reads, “The pandemic of the novel coronavirus is a bow wave, slicing through whole populations at breakneck speed.” No one is immune. We have felt this wave curl over our own family.

My brother Hank, 53 years old, suffered through six weeks of the coronavirus at home from March 2 through April 5. He was alone. Our family worried. We called, texted and kept in touch with one another every day. But only so much can be conveyed through technology. Much is withheld. Hank is now living with us in the desert, finding his strength returning day by day walking with his two dogs, Blue and Jaq. 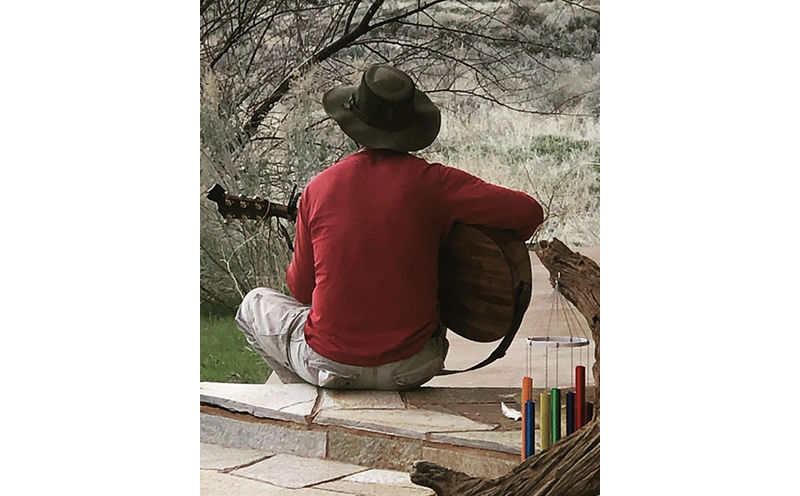 Hank playing his guitar in the desert, 2020

A man of few words, I asked Hank if I could interview him for Accelerate as a way to personalize a global disease that is embracing the planet when we cannot embrace each other.

This is our interview:

TTW: I am so grateful you are here, both in the desert with us and alive. You were among the vulnerable, those most at risk for getting the COVID-19 virus. Let’s begin with why:

HANK: It’s a long story. In 2011, I was working in Tucson for Tempest Enterprises as a superintendent. Much of my job was overseeing the digging and backfilling of the trenches where we lay the pipe for natural gas. There’s a lot of dust in the air. I got sick. It was diagnosed as Desert Fever. It morphed into pneumonia.

Back in Salt Lake, the pneumonia got worse. Ended up in the ER where they took x-rays and found a large abscess in my right lung. I was admitted to the hospital where they had me under observation and shrunk it with drugs – given through an infusion. Then, it came back almost filling the right lung. I was coughing up blood – they did a procedure to put in a tube to drain the lung. In the process, they punctured the lung and it collapsed which led to emergency surgery – They took out half of my right lung. It was gnarly. I was in the hospital for 31 days.

TTW: Have you felt vulnerable since you lost part of your lung?

HANK: Since contracting Desert Fever, every six months I get a lung infection – the right lung gets infected followed by bronchitis. The pollution in Salt Lake doesn’t help, especially, since I work outside every day. In the last six months, I have gotten sick twice – I always get a flu shot.  But nothing prepared me for this – the coronavirus.

TTW: Do you know how you got it?

HANK: We got a new laborer. He went to San Jose for a week and came back sick as hell. He left. We heard he went to the hospital. He had corona. Nobody’s heard from him since. We were on the same crew.

I knew I was going to get sick from him and a week after that I started getting symptoms. I wasn’t the only one. Three of us on the crew got sick. I took Wednesday, Thursday, and Friday off. Couldn’t move over the weekend. Just laid there. It was bad, I kept thinking I could shake it off. Went back to work on Monday and barely made it through the day and that was the last time I went in. Haven’t been back to work since.

TTW: What were your symptoms?

HANK: Congestion, coughing, sore throat, my voice was gone, I couldn’t talk. I could hear my lungs sticking when I would breathe and when I coughed it wouldn’t move the congestion. I was coughing up dark pea green phlegm with white splotches – thick – thicker than I have ever seen. Nothing like I had seen when I had pneumonia.

I had a fever and ached all over like someone had taken a bat to my body. I had constant chills – it was horrible – I couldn’t get comfortable – I couldn’t move just sweat and froze with chills.

I couldn’t talk, couldn’t breathe. I went home and basically suffered for two weeks trying to get over it.

My plan was just to ride it out as long as I could – hoping it would just take care of itself. But my breathing was just getting more and more shallow. It hurt like a weight on my chest. And the fever just wouldn’t leave.

TTW: When did you think it might be coronavirus?

HANK: It was different from anything I have had before and believe me, I know my body – it was that I had a fever for three weeks that wouldn’t break and I couldn’t breathe. It was like someone standing on my chest and it was sticking – you can’t sleep because you can hear your lung – sounding like a small motor – even when you are breathing in and out, it’s still going, that sound, almost like a monster living inside of you.

And then, the burning, it was a burning cough, dry, and nasty that would burn your throat raw. Yeah, I had no voice. I just knew.

The third week, I called my doctor – usually I can get in a day or two – but this time it was two weeks out. I told them I thought I had the COVID virus. They said to call the CDC which I did. I called the CDC people in Utah – I spoke to a woman. She was very empathetic, very cool, she took down all my information, talked to a doctor told her I had half my lung removed in 2015 – and said she would talk to a doctor and call me back.

TTW: And did she?

HANK: She did, right away and said that they wouldn’t authorize me to be tested because the doctor didn’t think I was deemed high risk because of my age and that I should talk to my own doctor. She wished me well.

TTW: Did you tell her about your prior history, losing part of your lung, the frequent lung infections?

TTW: So then, what did you do? I mean I know we were checking in with one another every day, but you didn’t tell me any of this.

HANK: Well, I just didn’t have the energy, Ter, and I didn’t want to make you and Dad worry any more than you already were. I kind of looked at it as no resistance, you just let it move through you. Again, I just thought I could ride it out.

TTW: Were you ever afraid?

TTW: Why didn’t you go to the hospital?

HANK: I knew they were turning people away. Every night on the news, they kept saying if you have these symptoms stay home. Plus, after 31 days in a hospital, there’s no way I wanted to go back in. (pause) I just resigned myself.

HANK: To whatever was going to happen. That’s when I texted you.

TTW: I have those texts. There were two hit that hit me really hard.

HANK: I remember when I wrote them to you, I was at my lowest.

TTW: Let’s look at them again: “Ter, whatever is going to happen already has. I will not live in fear.” This one that followed, “I feel like death could claim me and in this moment don’t see what’s to fear.”

HANK: Hmmm. I don’t remember writing any of that, I just remember feeling like I could die or not and it was out of my hands.

TTW: And then, what shifted?

HANK: People cared. People called. People brought food and left it on the doorstep. The men on my crew kept checking in. The family kept in touch — you and Brooke, Dad and Jan, Callie, Rich and Ruth, Steve and Lynne. And then, Matt saved me. (Matt is our cousin and a doctor). He got me tested. He got me zinc and some drugs – and when my doctor cancelled my appointment for the second time, I thought it was moving into pneumonia – Matt got me a Z-pac – and that helped – and slowly I just got better and slept most of the days until, my breathing became less shallow and I just forced myself to take deeper and deeper breaths – and well, I’m here, now – in the desert – and I feel like I’m coming back to life.

TTW: I am so grateful you are here. Tell me, Hank, what if anything, have you learned through this?

HANK: I didn’t want to die.

HANK: Yeah. I learned that any moment, you are guaranteed nothing but the breath you take in the moment. And when you are in that moment, seize that moment and enjoy it. You feel good, you have energy, you can breathe, you can do the dishes – I just cherish it... (he pauses)… and the taste of water.

TTW: Thank you, Hank, I am so relieved you are here and I love seeing you walk out toward Round Mountain, every day, with your dogs – reclaiming your strength.

HANK: Just being outside means the world. Seeing the deer, being in a wild place with room to roam.

And maybe alongside the caring of other people — the love of dogs – mattered most.

Hank Tempest with Winslow and Jaq, Round Mountain and the LaSals, 2020

I cannot stress enough that dogs are the highest form of beings on the planet. They patiently laid on my body, right on my chest and Blue would just lay by me on the sofa – he never left my side — and if I got up to move, both Blue and Jaq would follow me around, they wouldn’t let me out of their sights.

Being alone is not a bad thing either, you can’t run from yourself, you have to face yourself and the issues. You have to stay calm. Mentally calm – in spite of the wild dreams. The bad dreams. Being chased. Just dark things lurking. A lot of people from my life appeared, dead and alive, in my dreams. It was like an accounting, a reckoning.

Writer-in-Residence, Harvard Divinity School
Related Content
A Blessing, a Prayer, and a Plea for Another World
Emily Duma and Lorie Nielson | 3 minutes

We all need faith right now – whether in ourselves or a higher power. Harvard Graduate School of Design student Emily Duma shares three poems that offer a blessing, a prayer and a brief respite from our broken world, with an introduction from U of U Health Chaplain Lorie Nielson.

Is This Normal? What to Do With the Stress in Your Body
Jean Whitlock | 2 minutes

We’re all managing unprecedented stress and fear. What is “normal” right now? How do I cope? The Resiliency Center's Jean Whitlock describes how our body protects us and offers some strategies to help.

Am I Really a Hero? I'm Just Doing My Job
Paul Thielking and Megan Whitlock | 3 minutes

For many in health care, the heroic expectations brought on by the pandemic present internal conflicts that threaten our well-being. Director of psycho-oncology at Huntsman Cancer Hospital Paul Thielking and social worker Megan Whitlock examine this conflict and provide strategies for attending to our own needs.