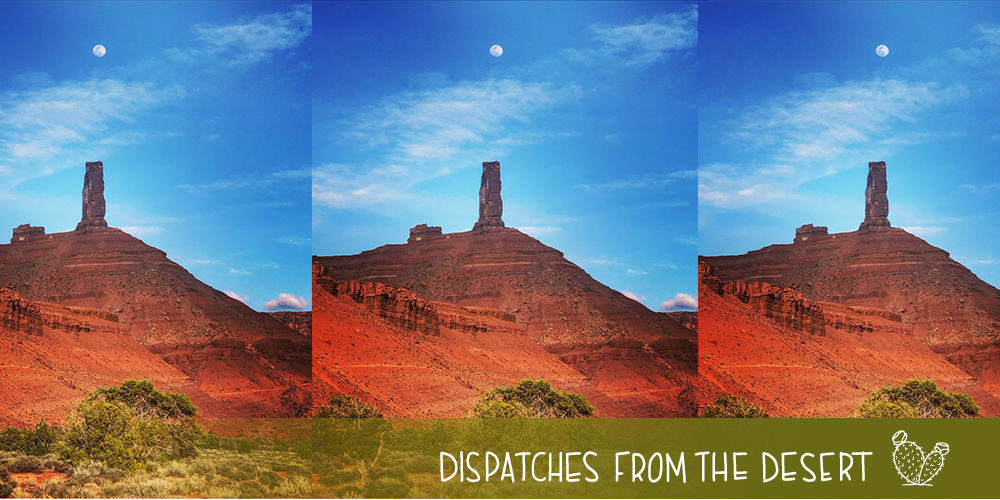 Photo by Terry Tempest Williams of the 2020 Supermoon above Castleton Tower.
resilience

atching spring unfold in Utah’s red rock desert is the unexpected gift of staying at home during this pandemic. Having taught on the east coast during spring semester for the past decade, I have missed this glory. Just this week, we have seen the arrivals of red-tail hawks, turkey vultures, morning cloak butterflies and painted ladies, lacewings, flies, mosquitoes, and bats at dusk. Scarlett paintbrush, the dwarf variety, appear as fireworks exploding close to the ground. Yucca are greening and growing their stalks, penstemon are rising from a mat of leaves, soon to bloom, and evening primrose are also sprouting green on the red hillsides. I can’t wait for the globe mallows to appear and the prince’s plumes. And just now, cottonwood trees are exhibiting their spring green halos of emerging leaves. Every day, we see something new as the mountain bluebirds and meadowlarks continue to delight.

Photo by Brooke Williams of Paintbrush in the desert.

Another blessing is having my brother Hank come to live with us. He is among the vulnerable ones to the coronavirus due to an abscess in his right lung which he lost several years ago, following complications from pneumonia. He is safer here in the desert. He’s also a fine musician and each night plays his guitar, often at dusk, when the deer gather. I have noticed them linger. I believe they are fans.

But the other day, we decided to take a long hike up to a particular ridge with our dogs. From the top, you can see canyon after canyon all the way to the river. The long view calms my heart, offers perspective, call it geographic relief. And when turning around, the circular view all around feels like an embrace.

On this particular afternoon, the Moon rose directly above Castleton Tower as though it was dotting an “i.” Shadows lengthened, temperatures cooled, and I told Brooke this is where I wanted my ashes scattered. He smiled saying if it was soon, he would manage my request, but in another decade or two, he may not be able to make the climb given the state of his knees. We laughed — but underneath the humor I prayed that we would indeed have that kind of time together. There are those moments when you want to mark the beauty with your life.

We sat close and watched the sun retreat behind Porcupine Rim. On our way down, we were met by a Congress of Ravens, sometimes known as an Unkindness. We counted twenty-seven individuals and then we stopped, they just kept coming. They soared without wing beats, spiraling in pairs higher and higher until out of sight; others folded back their wings dropping like stones then veering sharply away from us, perilously close – their playful games repeated.

Fanning the air above us, more ravens cawed and cavorted, careened and carried on as only they can do playing on the currents. Still high on the trail even as we descended, we witnessed their shiny black backs with outstretched wings sail by, their primary feathers looked like long fingers pushed back by the wind. Poe’s birds all seemed to be rushing and rising toward Castleton Tower – and then, they were gone. Not a raven to be seen. I kept looking, waiting, until I wondered if we had imagined the whole thing, this flurry of wings, their ardor, their disappearance.

This happens in the desert.

There are few experiences like a liter of fresh mountain water straight out of the waterfall—it is cold, it is clear, it has the terroir of the local landscape. As the spring runoff swells, Harvard Divinity School student Dan “Shutterbug” Wells reminds us of the bounty that surrounds us.

Terry Tempest Williams is a Utah native, writer, naturalist, activist, educator—and patient. Here, Terry shares the many ways artists and authors are responding to the full range of emotions of life during COVID-19.