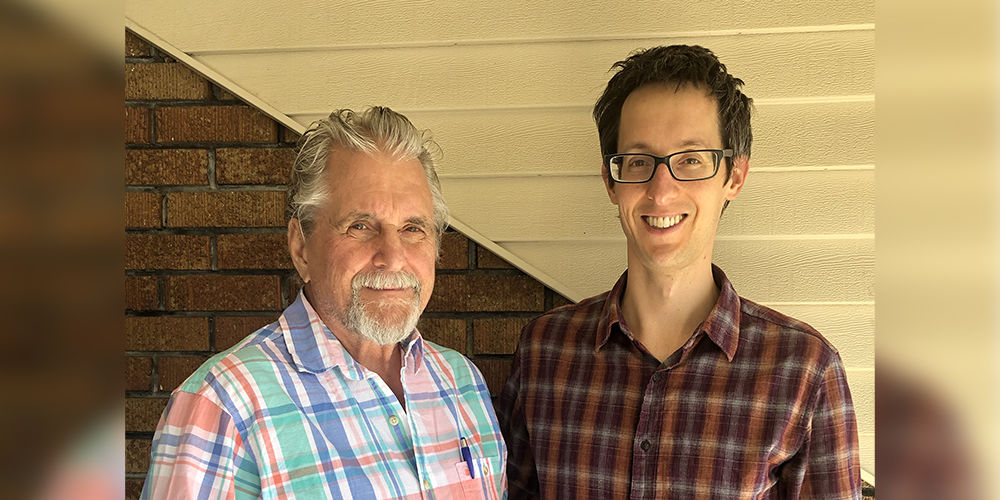 Breaking Down the Compassion Wall
Hospitalist Ryan Murphy reflects on the care his dad received as one of Utah’s first hospitalized COVID-19 patients. The experience shaped how he communicates with patients—whether or not they have COVID—in spite of isolation, masks, and physical distancing.
Ryan Murphy 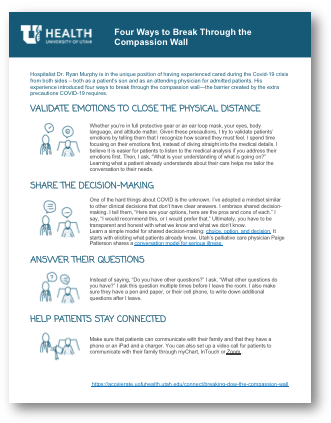 Download the Four Ways to Break Through the Compassion Wall 1-page quick tips.

few days after my dad flew to Salt Lake City from California, he developed a small cough and fatigue, and then started getting fevers. At that time in late February and early March, we were only testing people who had come from high-risk countries (like China or Japan). After a confusing trip to Urgent Care and an overnight stay at the University of Utah Emergency Department, he subsequently tested positive for COVID-19, and was admitted to the hospital on a Friday. Everything happened quickly after that. By Saturday, he was in the ICU for increasing oxygen needs. By Sunday, he was on even more oxygen. By Monday, he was intubated.

Being a doctor and the son

My dad, Neal, recently retired from a long career in academics and private practice in dentistry. He is a native Midwesterner and proud husband and father. Growing up in the 1950’s and serving in the Air Force Reserves, he learned early on how to be tough and stoic.

One of the first things I did when my dad was admitted was deliver his cellphone and charger so my mom and I could talk to him. Like other health systems in the country, University of Utah restricted visitors in March. It was hard to be apart from him.

When you work in health care, you are very conscious of all the potential errors that can and often do occur. I’ve been on the other side, where we say, “The outside records aren’t there,” or, “The history we got was incomplete.” I’ve always told myself that if any of my family were seriously ill, I would be there. I would sit in their hospital room and never leave. I wanted to be there with him, even if he was sleeping.

I also didn’t want to hassle the nurse every hour, asking about his latest labs or vitals, so I called twice a day. I called the off-going nurse at 6:00 in the morning to hear about the night, and then called again at 6:00 in the evening before shift change. Many of my dad’s providers also called me in the afternoon after rounds.

We didn’t know if my dad would survive after he was intubated, so I made a point to FaceTime with him and my mom to talk about what he would want. I’ve had hundreds of conversations over the years with patients about their “goals of care.” “If your heart were to stop and you were to die, would you want us to try and bring you back to life with CPR?” or “What kind of restrictions in your daily life would you be comfortable with?” But when it came to talking with my dad, I was like a medical student having the conversation for the first time. It was hard, awkward, and so painful to get through. We said our goodbyes, wrote down final messages for friends and family, and talked about what he would want at his funeral.

Fortunately, my dad recovered after being on a ventilator for five days. The first days were touch and go, but after that he stabilized and started to get better. He recovered, discharged, and is now staying with me. The experience has helped me break down what some have called the compassion wall—the barrier created by the extra precautions COVID-19 requires. 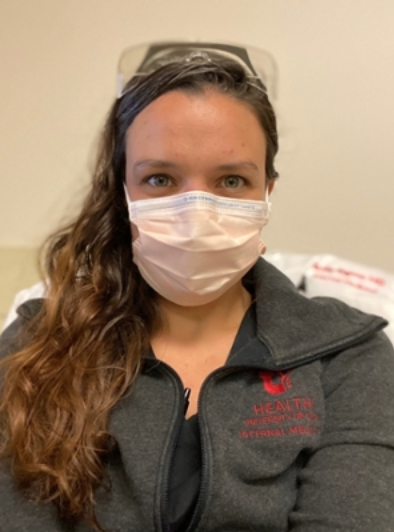 Ryan's colleague Emily Signor (above) admitted his dad from the emergency department to the inpatient unit. Emily reflects on being one of the first physicians to treat a patient with COVID-19.

“There’s a compassion wall,” says Gene Scerbo, who is also part of a hospitalist team. “You don’t feel like your level of compassion can get through it to your patient. You feel guilty you can’t provide a hand on their hand; ease the burden of their disease.”

That experience has taught Signor something valuable. “It’s important for me to know each patient as a human being, with thoughts and emotions. It’s something I want to continue to emphasize in my career.”

I empathize with patients who don’t have their family with them. I make sure that patients can communicate with their family and that they have a phone or an iPad and a charger. I recently had a patient who was recovering from COVID-19 after being very ill at another hospital. He hadn’t been able to FaceTime with his wife and two kids until recently. We made sure he had an iPad available.

Instead of saying, “Do you have other questions?” I ask, “What other questions do you have?” I ask this multiple times before I leave the room. I also make sure they have a pen and paper, or their cell phone, to write down additional questions after I leave.

When I see COVID patients, I’m in full protective gear including a face shield or a PAPR. When I see non-COVID patients, I’m wearing an ear loop mask. No matter what kind of room it is, I have to do a lot of communicating. In light of the pandemic, I rely on my eyes and my body language, but even that is limited. I don’t sit down like I usually do, I touch things minimally, and I don’t shake hands. I stand six feet away—and it’s really awkward. I recently had a patient who became very emotional. Normally, I would sit down and be close, but I had to stand six feet away and just hand him a box of tissues.

Given these precautions, I try to validate patients’ emotions by telling them that I recognize how scared they must feel. I spend time focusing on their emotions first, instead of diving straight into the medical details. I believe it is easier for patients to listen to the medical analysis if you address their emotions first. Then, I ask, “What is your understanding of what is going on?” Learning what a patient already understands about their care helps me tailor the conversation to their needs.

One of the hard things about COVID is the unknown. We developed protocols and processes in the several weeks between my dad being hospitalized and my return to clinical service. But there are still unknowns. I’ve adopted a mindset similar to other clinical decisions that don’t have clear answers. I embrace shared decision-making. I tell them, “Here are your options, here are the pros and cons of each.” I say, “I would recommend this, or I would prefer that.” Ultimately, you have to be transparent and honest with what we know and what we don’t know.

Thank you is an understatement

My dad repeatedly commented on the great care he received. Our teams constantly asked what he needed, accommodated his various requests and answered his many questions.

Paul Yannopolous in the Emergency Department and my hospitalist colleague Emily Signor should be commended for their compassion and courage serving on the front lines and caring for my dad early on before we had many of the protocols we have in place now for known or suspected COVID-19 patients.

If there is anyone I would want taking care of my dad while he is on a ventilator in the ICU with ARDS from COVID, it is Nate Hatton and Emily Spivak, who have been two leaders in our institution in the management of COVID-19. Both kept me up to speed on my dad’s progress and involved me in decision-making with numerous phone calls. I particularly want to recognize Nate for clarifying how much I wanted to be the doctor versus how much I wanted to be the son—I’m going to steal that line.

Continually speaking up is one of the most challenging things an employee does, and making it safe to speak up takes consistent supportive leadership. Members of the patient support services team share how to empower employees to highlight issues and provide solutions.

Digging In To The Outward Mindset
Nick McGregor | 2 minutes

In the new series Book Club for Busy People, Accelerate shares highlights of books we’re hearing about from the community. First up: how thinking about others’ needs strengthens teams and increases civility in The Outward Mindset.