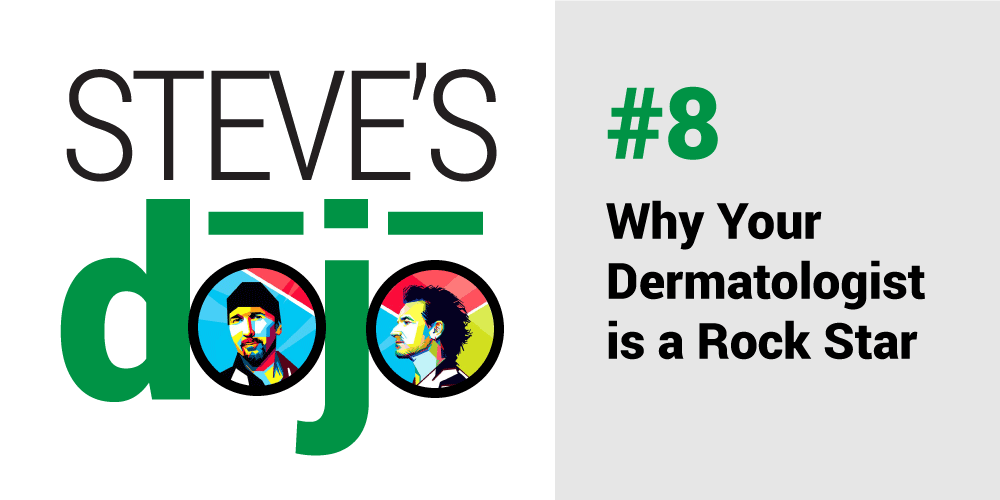 How Dermatologists Chris Hull and Mark Eliason are Like Bono and The Edge
If in previous dojo posts, you still haven’t found what you’re looking for, today’s post will satisfy your desire. In it we describe the mysterious ways of Drs. Chris Hull’s and Mark Eliason’s clinic practice. Unless you’re a patient, you can’t witness their clinic, but this post is even better than the real thing.
Steve Johnson
If

you’ve ever had a suspicious mole removed and declared, “This dermatologist is a rock star,” you were not being quite as hyperbolic it might seem. Value Engineering has been studying and improving clinic flow at University of Utah Health since 2015. When we learned how two dermatologists, Chris Hull and Mark Eliason, run their respective clinics, I thought, that’s how U2 ran their 360 Tour . Their model differs in important ways (and for various reasons) from the flow manager model we’ve introduced to other clinics, but it works well for them.

The 360 Tour stage, looking like an aggressive spaceship, was also the biggest ever. If only it could’ve flown intact from city to city. Rather, it was dismantled and loaded into 120 (not a typo) semi-trucks. It took 150 people and four days to re-build it at each new venue. If logistics is your thing you can find out more at the tour’s suitably massive Wikipedia page.

Flowing the Biggest Concert Tour Around the Globe

To accommodate the extended time requirements, concert planners built three identical stages supported by three crews. The band played on Stage A on Monday, Stage B on Tuesday, Stage C on Wednesday, then rested and repeated. The band went to every city (obviously) but each crew only saw 1/3rd of the tour stops.

Flowing a Constant Stream of Dermatology Patients Through a Clinic

Hull and Eliason follow the same pattern as the U2 tour. The time a patient spends in clinic is always longer than the time the provider spends with the patient because patients need to be roomed before and checked out after, as shown in this graphic.

To accommodate the extended time requirements, Hull and Eliason use three identical rooms supported by three MAs. The provider works in Room A, then Room B, then Room C, then catches up on charting, then repeats the pattern. The provider sees every patient (obviously) but each MA only sees 1/3rd of the patients.

Clearly the Hull/Eliason model represented here (and in their templates) is an ideal that is often disrupted by specific patient needs (aka “flow busters”) but overall it works very well. Both Hull and Eliason are productive and efficient. Their system maximizes the top-of-license principle while rarely causing the providers to wait on patients, both of which are important flow principles. Patient wait times are likewise minimized as reflected in their patient satisfaction scores which are consistently above the 95th percentile.

When dermatologist Dr. Stephanie Klein proposed a clinic for urgent skin care needs, she thought it would be easy. Reserve the clinic rooms, schedule the appointments—done! She quickly found out that moving from idea to reality would require leadership skills that she hadn’t been taught in medical training and ten years of practice. Accelerate’s Mari Ransco found out how Klein transformed from busy clinician to leader.

A Look Back at the Project Charter
Steve Johnson | 2 minutes

In this week’s dojo Steve takes a look back at the Project Charter with a dramatic retelling of actual history.

Waiting is such a firmly entrenched feature of health care that it is often expected. The solution starts with the team. Orthopaedic athletic trainer Ian Crossett details the 4-step, team-driven process that sends a message of respect for everyone: provider, patient and team.