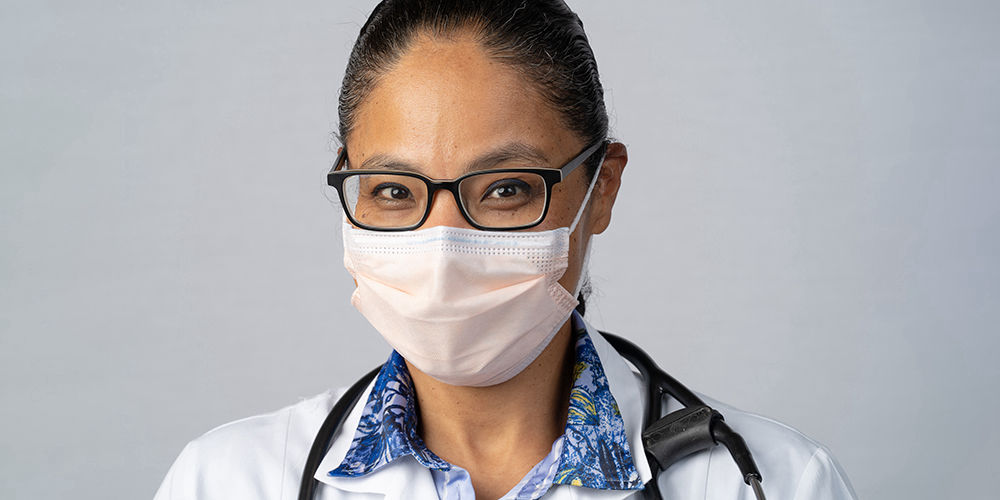 We All Have Stories—What Will You Do With Yours?
Chief Medical Information Officer Maia Hightower knows that positive change happens by building a community where people can be themselves—especially those people who may not have had the same opportunities. She shares her story to inspire change.
Maia Hightower
S

haring my story is part of the job description. I share different stories about my life, depending on whether I’m speaking from the perspective of a leader, a physician, or any other identity I carry. We are all multiple stories with rich life experiences.

This story is about who I am as a person, as a parent, as a community member, and as a leader. It is about my own career trajectory and pathway, which is to provide our patients with better tools that close some of the health inequity gaps they face.

I am a Black, multicultural woman of color from Berkeley, California. My father is Black and my mother is Chinese-American. I grew up south of the redline, so to speak, in a predominantly Black neighborhood. It was rough on the edges then, but like any part of Berkeley, the neighborhood I grew up in is very different today. It has undergone tremendous gentrification.

My parents were not radical, even though their marriage was. They embraced an interracial relationship at an early stage in our country’s history, in the 1960s and 70s. While their relationship was somewhat radical, they were quite traditional. We were one of the few nuclear families on our block. Friends called us The Brady Bunch because we had a mom and a dad that lived together. My mom would yell when we were out playing, "It's time for dinner."

My younger brother and sister and I grew up appreciative of not only our core nuclear family, but our extended family. We had cousins and aunts and uncles on both sides and they provided a buffer to the sort of rough and tumble neighborhood we grew up in. It was a privilege that doesn’t escape me. We were also somewhat different from our neighbors because we were Buddhist. And we were one of the few Black Buddhist families in our temple.

Starting college with engineering (not medicine) on my mind

I didn't have an early interest in health care. I went to college intent on pursuing a career in engineering. I enjoyed the mathematical aspects. But it felt isolating to be in another part of the country (I went to Cornell), studying a discipline that had few women of color at the time.

I went to a career development event where we went to see a manufacturing plant. The engineer that worked there was a Black woman. She seemed nice and was clearly excited about what she did, but she was cooped up in a small office at the back of the plant, separated from the rest of her co-workers. I don’t remember thinking about race, or ethnicity, or diversity at the time. All I could think about was how lonely she seemed.

Traveling abroad and into health care

I ultimately chose to leave engineering and pursue medicine after I earned a scholarship to spend a semester in Kenya. There, for the first time in my life, were people who looked like me who were the dominant majority—a whole continent of brown people! But they had so many other struggles. I was privileged. I could explore any field I felt inclined to study. At the same time, I felt a connection to some of the Black women there, who didn't have such opportunities. My family had sacrificed so much for me: 400 years of blood, sweat, and tears, so that I could have incredible opportunities. I felt a strong sense of obligation to give back in a more fundamental way. I decided to become a doctor.

After finishing pre-med requirements and graduating from Cornell, I served as a Peace Corp volunteer in Cameroon for almost three years. I applied to medical school while I was abroad, and, immediately upon returning, started medical education at the University of Rochester.

I hoped to become an infectious diseases doctor, after being moved by the impact of HIV/AIDS on the neighbors and community members I served. I was also touched by the plight of children and chose to specialize in internal medicine and pediatrics, with the intent of treating the most critically ill person, whether newborn or one hundred years old. I planned for a fellowship in infectious diseases, but life took another turn.

I think I was as young as 15 when I somehow got it into my mind that I was supposed to have my first child before I turned 30. It might have been right around the time I met my future husband, even though we didn't date for almost a decade until I came back from the Peace Corps.

Some people choose to delay parenthood until the next milestone—after medical school, after residency, after fellowship, after a practice is established, after advancement from assistant to associate professor. After, after, after. There's no such thing as a good time, so during my second year of residency I became pregnant with my first son and was one of the first women in my class to have a child during residency.

UC San Diego, where I did my residency, was very supportive. They identified a lactation room and ensured that I had access to maternity leave, as well as different accommodations to my schedule to support my parenthood choice. Inadvertently, I became a role model for others, and in subsequent years it became more common for residents to pursue a family.

After four years of residency, parenthood, lots of juggling, my husband and I figuring it out together, I decided I needed a break before a fellowship. We returned home to the Bay Area where I joined a private practice and became an internal medicine primary care physician.

Finding my way to IT

Healthcare IT has a bit of a negative connotation. At the same time, it is incredibly powerful. It is a mechanism by which we systematize all sorts of change, whether it be a change for regulatory purposes or because it's the direction we want our culture to move toward. That includes diversity. Diversity, equity and inclusion have long been values that I hold dear, and they have also been key aspects of my leadership style.

During that first year of practice I decided to expand my tool box by pursuing Wharton’s executive MBA program on evenings and weekends, while continuing to practice during the day and support my family.

As I was finishing up my program, Stanford became interested in acquiring our practice. The timing was right. We sold the practice and I joined Stanford as one of their associate medical directors in their equivalent of U of U Health’s Community Physician Group. From there, I went to University of Iowa (as their Chief Medical Information Officer), before coming to Utah.

One area I've made an impact is in creating an inclusive community for women in IT, both in Iowa and growing here at the University of Utah. Traditionally, the provider champions that typically are interested in IT are male. Across Chief Medical Information Officers it is very male-dominant. It wasn't until recently, in the last year or two, that our professional body began recording gender when doing surveys.

In Iowa, I had the opportunity to grow our clinical informatics program from a small number to over 25 providers. I wanted the diversity of our faculty—ages, genders, specialties—to be reflected in our clinical informatics program. I began by recruiting differently. I focused on aptitude and interest, rather than a traditional computer science background. The job description, for example, focused on addressing the EHR component to physician burnout. The types of applications we got were very different, and we recruited an incredibly diverse group of people that reflected the broad spectrum of diversity of our faculty.

This new group, especially the women, felt like they were on a mission, that they had purpose. That purpose was to help so many of our providers that are suffering from EHR-related burnout. We are replicating this same approach here at U of U Health. I feel very fortunate to be able to do this work twice.

Recognizing my privilege and using my platform

My story is my own. I've always been fortunate to be in a position of relative power. I've been a partner owner or a leader within the academic medical centers that I've worked, whether it's Stanford, Iowa or here. My experience isn’t the same as a woman of color coming through traditional faculty rings. I think I’ve been granted a lot more authority or respect due to my titles than many of my colleagues. I share my story because I want to change that.

Change in the workplace, be that health care or IT, happens by focusing on building a community where people can be themselves—especially those people who may not have had the same privileges that I’ve had. We’re doing that work here. In these communities, all of us—women and men—are creating a rich workplace where everyone feels welcomed and encouraged to give.