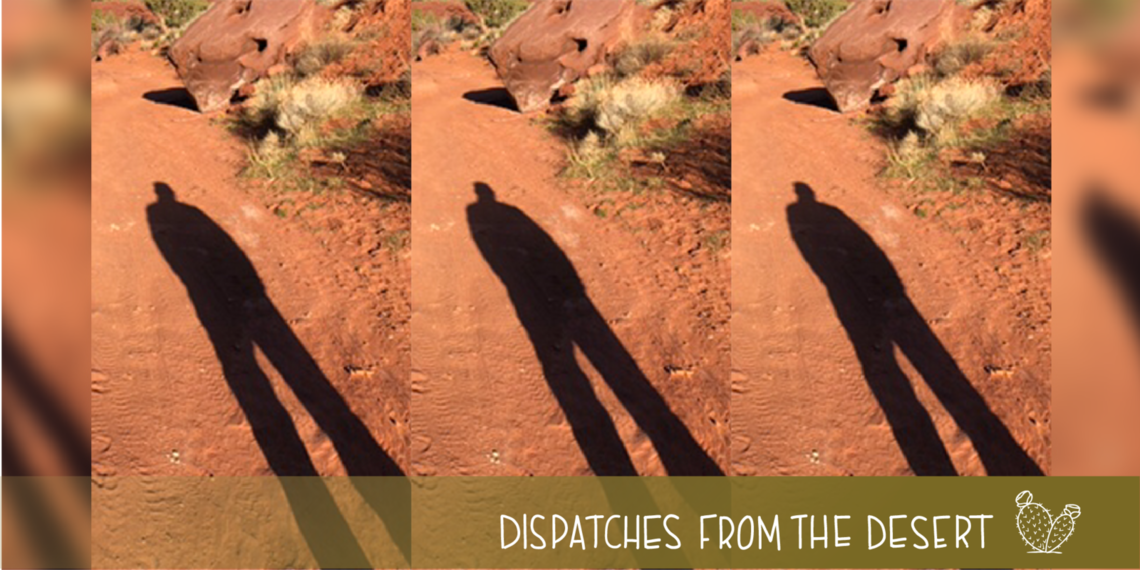 Facing our shadow, facing our grief. Photo by Terry Tempest Williams.
dispatches from the desert

was the first time in 52 days, I ventured outside of Castle Valley. It will be another 52 days before I leave again. I have gone on weekly walks in nearby canyons and taken picnics down to the Colorado River, but I have not seen the physical evidence of living in the midst of a global pandemic. The world has changed. I knew it intellectually, but I hadn’t experienced it for myself. We have been sheltered here in place, a beautiful quiet place for close to eight weeks, along with everyone else. We have gone through three self-quarantines since March 11. The first was a 14-day self-quarantine after arriving home from living in Cambridge, Massachusetts and visiting New York. The second was when my brother Hank came to live with us after suffering through a six-week ordeal with the coronavirus. And the third self-quarantine was cut short because Brooke’s test came back negative after being exposed to an employee at the Moab liquor store who tested positive for the virus. We have been lucky. We have all been healthy and healing. Life on the outside hasn’t been that different from how we usually live our lives in Castle Valley. It’s a chosen solitude. A privilege.

But it wasn’t until Brooke and I went to Grand Junction, Colorado on May 2, after the green light from Mesa County that they were opening up, that I realized we are all masked bandits now, gloved and suspect. In City Market, people were tentative, fearful. No one was talking. We looked at each other as either a potential carrier of the virus or a person at risk of getting the virus. Aisles were directed one-way for cart traffic. Since Brooke has been the designated grocery shopper for us, he was unfazed. I was overwhelmed. I had difficulty focusing on what was on my list because I was preoccupied watching everyone else manage theirs. Brooke and I had our own carts – I kept going up the aisles in the wrong direction having to making u-turns. It took forever to get all my designated items. And there was the impulse buying. Blue corn chips and salsa. Cookies. Cake mixes (!) and yams. Strangest of all: buffalo salami and lemon curd. Folks at the cash register where good-natured and most everyone thanked them for what they were doing. Once outside at the car, we unloaded the carts, took them back, and then, unmasked and ungloved ourselves, taking a squirt of hand-sanitizer given to us by the Castle Valley Fire Department.

We looked at each other as either a potential carrier of the virus or a person at risk of getting the virus.

Grand Junction is not a big city, but it felt more foreboding and estranged from normalcy than Boston, maybe because we weren’t walking which is what one does in an eastern city, but rather, we were driving from place to place, which is typical in western cities. It just felt more isolating. When one is a pedestrian there is a sense of purpose and spontaneous meetings on the street, even if six feet apart — I can’t really explain it. In a car, you can physically afford to drive around aimlessly because your foot’s on the gas pedal. When you are walking your body becomes accountable for every step.

Driving home, we passed black cows grazing in the Cisco desert, cottonwoods were budding along the Colorado River and we stopped to watch one golden eagle standing on the top of a dry knoll looking regal. 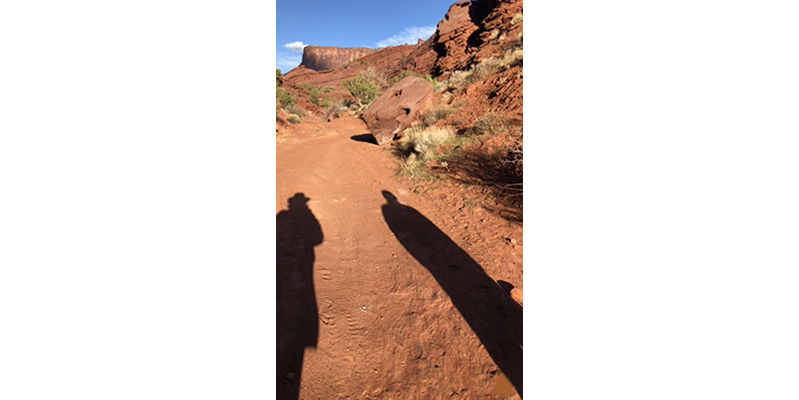 Social distancing in the desert. Photo by Terry Tempest Williams.

Emerging from seven and a half weeks of quarantine and traveling two hours to a small city in southwestern Colorado, I felt unmoored from my anchor in the desert. Going out publicly still felt like a risk. I thought about all those who have been working outside as so many of us have been working inside – and how striking the difference is as social inequities regarding class, race, and what is essential and what is not is being painfully exposed. A grief unknown to me settled in my body like a heat wave. I suddenly longed for all that was once easy and taken for granted – like running into the market and getting what you needed, pausing to visit with friends over the fruits and vegetables section of the market; not worrying about what my hands had touched and what yours were about to touch. I missed the spontaneous and unexpected exchanges that were all part of a day – that now, could become deadly.

A grief unknown to me settled in my body like a heat wave.

I’m still not getting to what I want to say. I came home depressed. The news of the liberation protests in Michigan and California gaining momentum across the country with cries and fists raised in the name of keeping “America open again” were distressing. America now appears to be visually split by those who choose to wear masks and those who don’t as the numbers of people infected by COVID-19 continue to rise and more people are dying.

And then, there was this – which I hesitate to share because it sounds superfluous in the middle of a pandemic — we drove to Grand Junction to get a cat. Our home is overrun with deer mice, cute as they are, they are “a reservoir for human diseases” including hantavirus which has no cure. They also are destructive to all manner of fabrics from bed linens to clothes, not to mention the unnerving gnawing throughout the night. The other morning, we found one mouse on the floor in the kitchen in a meditation pose. We could not allow ourselves to be seduced by religious mice. Instead of live traps, snap traps, high frequency sound devices and god help us, d-Con (which we have not used), we decided to trust the most reliable form of mouse control: a cat. 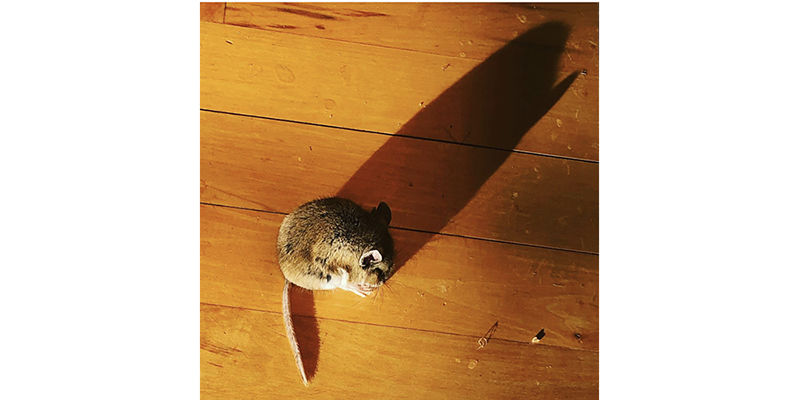 After getting groceries, we went to meet Tillie, an adorable Burmese cat, whose picture we fell in love with on the shelter’s website. Long story short: We were rejected as her adopted parents. We couldn’t promise “yes” to keeping her inside. She was small, and we learned “emotionally fragile.” When they asked us what kind of predators we had in “the neighborhood,”  we were honest. We said: hawks, eagles, owls, coyotes and a few snakes. Oh, add black widows. And that was that.

In truth, I fell in love with a cat named Dale, but he had anger issues which didn’t bother us — he did hiss a lot, but we found out he came from a “feral colony” and then taken to a foster home after being abandoned in a storm. But he had a good heart, I could feel it and so could Brooke. I was holding Dale when she told us he didn’t do well with dogs or children. She then asked if we could keep him safe from both. We reluctantly said no. We cherished the children in our lives and had a dog.

We were two for two. The woman in charge said matter-of-factly, she did not think we were good candidates for adoption at this time. She appreciated our interest and invited us to return when our “situation” changed. We said goodbye to Tillie and Dale and drove home.

I kept thinking about Dale and how he stared at me when we left. He had only been in the shelter one day. He was so dignified in his gray coat and green eyes. I felt we had a connection. We could work with his anger. I have anger issues, too. With a name like Tempest it comes with the territory.

Who gets rejected for wanting to give a homeless cat a home full of mice? I wanted to drive back to the shelter, walk back inside and politely say, “Here are the names of all the cats I have loved and lived with in my life: Sapphire, Emmy, Patches, Luna, El Noche, Virginia and especially, Molly who lived until she was 19 years old and sat on my lap every time I wrote.”

Who gets rejected for wanting to give a homeless cat a home full of mice?

I’ve had cats since I was a child. I remember throwing a neighborhood cat party in our garage when my mother was glued to the television in the aftermath of the Kennedy assassination. It was only when I emerged looking as if I had been in a razor blade fight that mother asked what happened. The cats didn’t like the tuna casserole cake I had concocted when I kept lifting each cat over to their designated birthday plate. The cats didn’t get along that well. We momentarily lost several to the attic. But that was a long time ago. I was only seven years old.

Nostalgia is “a sentimental longing or wistful affection for the past, typically for a period or place with happy personal associations.” Nostalgia is also "the state of being homesick, homesickness" and "a wistful or excessively sentimental yearning for a return to or of some past period or irrecoverable condition.” Can depression be a form of nostalgia, too?

When we find we can no longer count on what we once believed was a given – like running into the market for groceries or finding a cat in a shelter to give a home, it’s easy to lose track of who we are. We get lost. I not only don’t know how to be in the world I now find myself in – I don’t know who I am inside it. It can be disorienting and destabilizing, at once. If I can’t hug people, engage in spontaneous conversations, even rescue a cat to rescue me, who am I? Who are you? Who are we together?

I withdraw. I retreat to what I know. The past. Memories remind us of sunnier days and we amplify them in our own minds in order to create solid footing. But the past is often a fiction. It’s a good novel we can read on vacation. Sooner or later, we have to return home and accept where we are. We are in a global pandemic and it is not going to disappear quickly. More people are going to get sick. And more people are going to die. I grieve for what we are losing – people we love, family members we cannot see, friends we cannot visit, lost incomes, the freedom to work as we have in the past, to be spontaneous and travel, and at times, be extravagant and reckless. Unprocessed losses follow us like ghosts. Who wants to deal with our shadows? We would rather believe they aren’t there. We run away from our grief until one day it taps us on our shoulders and says, Here I am — I will follow you. I will haunt you until you face me.

Sooner or later, we have to return home and accept where we are.

Facing change, disappointment, and sadness, asks everything and more of us. We do it alone and we can do it together — we can even make light of our own situations, small and large with humor (we are “unfit adoptive parents for a cat from a feral colony”); and I have learned that often the darkest moments require the darkest humor if we are to survive the true horrors and heartbreaks of our lives. In the end, I believe our energies may be better spent on the “what is” rather than the “what used to be.”

I think I might put a bowl of milk outside our door tomorrow and see if there is a cat in Castle Valley who needs a home — that feels right to wait and see who comes.